Who’s In the Band?

Perhaps the most unique aspect of The Salvation Army’s participation in the Rose Parade is our history of generations of families that march year after year. by David Reardon
Share
PRINT

Perhaps the most unique aspect of The Salvation Army’s participation in the Rose Parade is our history of generations of families that march year after year. This year, the Smith family from the Florida Divisional Band puts that on full display. Richard, Robin, Jessica, Amber and Richard Jr. essentially make up an entire band on their own with their near-complete coverage of the instrumentation in a traditional brass band. The Smiths come from the Orlando Corps, where they’re all faithful band members. Richard and Robin are both generational Salvationists and have known each other since they were young. Richard, who recently passed the bandmaster responsibilities of the Orlando Corps’ Junior Band to Jessica, talks about the music of The Salvation Army being combined with discipleship. “It becomes infectious when you have mentorship that teaches you about the Lord and about music, and they get tied together. You want to … demonstrate to others what God’s done in your life [with] music, so that He can do the same to others.”

Jessica, the oldest of Richard and Robin’s children, is the only member of the Smith family to have previously marched in the parade. She recalls her first experience in the Rose Parade in 2019, and the powerful moment when the band makes the turn onto “TV Corner.” “The parade started, and we were right there at the camera and that big turn.” She recalls the band playing “This is My Story,” a perfect song of testimony played for the millions watching in that moment. Coming into this trip, Amber, the second oldest, was looking forward to the multiple opportunities they would have to share God’s message.

Besides the Rose Parade, the Florida Divisional Band marched in California at two other events, one of which was in Disneyland. Richard Jr., one of the youngest members of this year’s contingent, was excited about his role in the band’s percussion section, and the responsibilities that came with it.

This talented family prepared for the parade in a highly unusual way. “We marched around Disney World singing our parts,” Robin says. The Smiths took advantage of their proximity to the park and proudly marched, humming their parts to the music they played on New Year’s Day. “We’re walking back to and from the entrance of the park … all the way from our car,” adds Richard. When asked if they received any strange looks during their practice, Richard says “There’s a lot of weird things going on … We’re not the weirdest.”

Rodney Jean, a recent graduate from Asbury University with a degree in music, is a member of the Florida Divisional Band. He soldiers at the Tampa Corps, where he serves as the Music Director. Rodney was brought into the Army when a friend invited him to youth programs. He was then asked to come to a Sunday service by another trombone player, Mozart Charles (more on him later). When he heard the corps band for the first time, Rodney was entranced. “I saw the brass band and I was like, ‘Man, I gotta be a part of this.’” He quickly joined the music program and took part in all the events he could: local band, music camps, divisional band, Territorial Music Institute. People took notice of his skill, and before long he was offered a scholarship to Asbury in the music program. Now he’s back at a corps, providing the same kind of ministry that changed his own life.

This is Rodney’s fourth trip to the Rose Parade, and he views the parade as a service that he’s performing for God. “There’s always somebody who is touched by what The Salvation Army plays. They’re used to just hearing regular music, but then when they hear that hymn ‘Amazing Grace,’ or ‘This is My Story,’ they’re reminded of something back in their past … They’re finding Christ again in that moment.” Rodney looks forward to seeing the other musicians that make up The Salvation Army marching band and being reminded yet again that he’s a part of something bigger than just his local corps.

Greg Payton worked with the Army for the entirety of his professional career, from age 18 until his retirement. Originally from Chicago, he’s been a Divisional Music Director in both the Eastern Michigan and Heartland Divisions. Now, he volunteers at the School of Music at the Clearwater Corps in Florida. Greg also serves as the Deputy Bandmaster of the Florida Divisional Band. He is passionate about the continuation of the Army’s brass band traditions and seeks to give back wherever he can. “It means the world to me that I can give back in a way that people gave to me growing up … I owe The Salvation Army. I feel that really deeply, strongly, and I’ll give until I can’t give anymore.”

Greg has been in the Rose Parade twice before, once in the 80s, and again in 2005. On his third trip to the event, he feels uniquely suited to offer advice to other members of the Florida Divisional Band that have never experienced the parade before. “There’s about 50% of us who are doing it for the first time … I’m at an age now that I can offer some valuable experience to the friends that I have in the Florida Divisional Band.” He was there this year to continue his practice of giving to and guiding younger musicians in the same way others did for him as a child and young man, and the Florida Divisional Band and the entire Salvation Army music ministry is better for it.

Joshua Norton, a regular participant in the parade from the El Cajon Corps in California South Division and member of the Western Territorial Youth Band, talks about the importance of the Salvation Army band in his life. “It’s been pretty foundational for my life in The Salvation Army,” he says. “All of my friends [in the Army] have always been in the band.”

Joshua cites his favorite moment of the parade as being near the end of the march, although not for the reason one might think. “Right toward the end, there’s a bridge for a freeway that we go under,” says Joshua. “And all the bands always stop under the bridge and play as loud as they can because of the echoes.” Kevin Larsson, the bandmaster leading the Salvation Army band, has gone so far as to even write specific segments into the music to be played when the band is under the bridge. “You stop in the tunnel, and everyone plays as much as they can. That’s always my favorite part.” This year marked Joshua’s seventh time marching in the parade with The Salvation Army.

Sylvia Strickland, another regular marcher from San Diego Citadel and the Western Territorial Youth Band, talks about how meaningful The Salvation Army’s music programs, and the Rose Parade in particular, have been to her. She remembers watching the parade with her mother growing up, and what it was like to have her dream of marching realized. “[My mom] seeing me actually marching was something that I never thought would happen, and so I was partly doing it for her … because she wanted me to have that experience.” She also mentions how it has given her the opportunity to create fulfilling friendships. Speaking about friends she’s made at various music retreats, she says “We’ve been friends for such a long time, and [marching] every single year together gives stronger bonds with one another, and it brought us closer to Christ.”

Sylvia also feels that music is an essential Salvation Army ministry. “The music that we bring to people is important to bringing them closer to Christ.” Raised in Salvation Army corps where she experienced Jesus working in her life through band music, Sylvia is eager to share that experience with as many people as she can. She goes on to say it’s important that the parade’s millions of viewers see young Salvationists marching because it demonstrates pride in their faith, and a willingness to follow the Lord and spread the gospel. “There are youth who wear [the] uniform because they want to!” This was Sylvia’s sixth year in the Rose Parade.

Mozart Charles is the Music Director at Miami Area Command and a soldier at the Edison Corps. Born and raised in Haiti, The Salvation Army band has been essential to his walk with Christ and his family’s as well. Mozart shares the story of his grandmother hearing of a job opening at a new Salvation Army corps in Haiti. She went to the corps, heard the band and broke down in tears. Not long after, Mozart’s father and uncle were enrolled as Senior Soldiers, and his father went on to become an officer.

Mozart was called to music ministry at a young age, when most of the bandsmen at his corps decided to stop playing. “We all started as Junior Soldiers. [Our officers said] ‘You know what? The guys left. Do you guys want to learn?’” It was up to him and the other Junior Soldiers to learn how to play and take over responsibilities of the corps band, and he’s loved making music ever since. He’s reminded of Luke 19:40, where Jesus says that if His followers stopped singing His praises, the rocks would cry out.

Now, Mozart pays it forward, encouraging all Junior Soldiers in the Miami area to praise God in the same way. “You become a Junior Soldier today, and the next day, we’ll give you an instrument.” Having sent many of his students to represent the Army in the Rose Parade before, Mozart is excited to finally experience the event for himself. “I’m looking forward to going because I’ve heard so much about it for many years.”

Dr. Adely Charles is the Divisional Music Director in the Florida Division as well as the bandmaster of the Florida Divisional band. While he serves the Army all around the state, his home is the Tampa Corps. His career started with the Army right after he received his bachelor’s degree, when he was tasked with strengthening the music programs in the Miami area. Adely is passionate about the spirituality of The Salvation Army’s music ministry. “We’re the gospel in unspoken form … Our music can touch someone’s inner being greater than somebody speaking.” Adely takes the responsibility of spreading the gospel seriously and says there’s no room for mediocrity in anything one does for the Lord. He doesn’t take for granted the role he’s been given in The Salvation Army’s music ministry. “It’s an honor and blessing to be able to play these instruments and to minister … wherever we go.”

This was Adely’s first march in the Rose Parade, though he’s sent several delegates from the Florida Division in the past. He says that the delegates he’s sent before were chosen because of their status as outstanding young musicians and creative artists, as well as having a strong Christian faith. Adely shares that he’s honored to have his entire Divisional Band be invited to participate in the parade this year and is excited about the experience. “I think it’s going to be an experience of a lifetime, especially for the younger ones.” 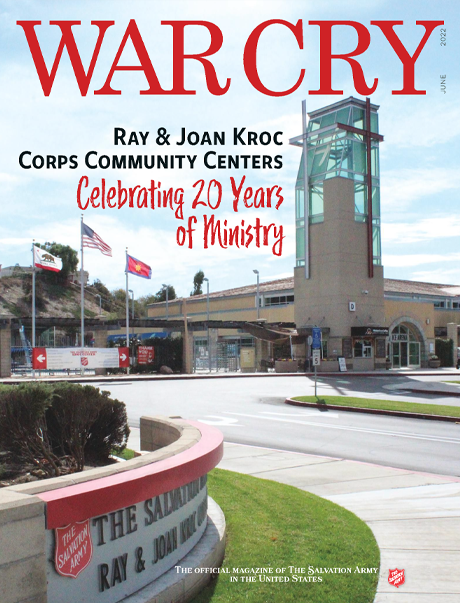