"The first Salvation Army flag was believed to be presented to the Coventry, England Corps in 1879." by Major Jason Swain
Share
PRINT

Catherine Bramwell-Booth was once asked about the need for a Salvation Army flag. She relayed that her grandmother, Catherine Booth, the Army Mother, had been asked a similar question in the 1880s. Her response was this: “We’ve been marching in the streets for years. We will march better now!”

The first Salvation Army flag was believed to be presented to the Coventry, England Corps in 1879. It was not particularly large and described as “about the size of a large men’s handkerchief,” which would have been about 24 inches square.

The flag was kept folded on the platform in Coventry for many months before finally being displayed. That original flag mysteriously disappeared in 1965. It was brought to London for the centenary celebrations and somehow lost at that time.

The Salvation Army flag’s first design used a sun symbol in the center. When the Army reached India, it was discovered that several different sects worship the sun as a deity and protested the use of it on a flag. So, the sun was changed to an eight-pointed star.

The motto “Blood & Fire” can be misinterpreted. The Book of Joel in the Bible’s Old Testament contains a passage, “I will show wonders in the heavens and on the earth, blood and fire and billows of smoke” (Joel 2:30 NIV), and many people point to this as its origin. But Founder William Booth often said that our motto was the “blood of Jesus and the fire of the Holy Spirit.”

The colors are representative of the trinity. The blue border represents God and purity, the red field represents Jesus and salvation and the yellow star represents the Holy Spirit and holiness. 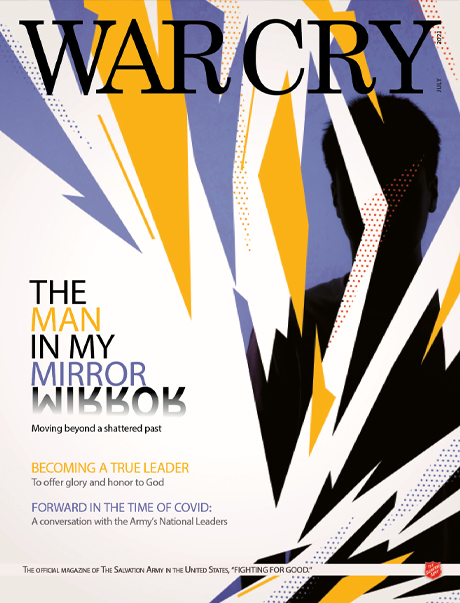