"The Army is literally serving people, and if you want to find a true happiness in this world, you have to find a way to serve." by Michele Katsaris
Share
PRINT

“2 Hearts” is a story about how two strangers have this hidden connection. This story shares why it’s important to celebrate life and overcoming challenges that life throws at us. The War Cry sat down with Radha Mitchell who plays Leslie in the film to share her experience playing Leslie and what this story meant to her.

WC: Can you tell us a little bit about your role in the movie “2 Hearts?”

Radha: In this film, which is based on a true story, I play a woman named Leslie who falls in love and has this magical fairytale relationship with this man that she meets while she is working, only to be encumbered with his illness which is something that she helps him navigate. What is beautiful about this story is it interconnects with another love story that occurs later between a young couple that also suffered a sort of medical kind of drama. What happens is this interconnection between the two stories where the two lives kind of become one in a way. You see how we all are so much interconnected as people and have a sense of serendipity and kismet and transformative in the sense that there are things that are very difficult that happened in life, that often if you step back, you see that there is kind of a meaning to things or something magical about the way things happen in life.

WC: Based on the previews, it seems that the two men have a connection because they have the same illness. How do their stories connect?

Radha: Yes, well, the story involves an organ transplant, which is a very interesting medical phenomenon. This is something that we are able to do, and you are able to see how this one life impacts all of these other lives. The story is told from the perspective of this young man who can see his life from a different perspective that you might have at the end of your life. That interweaves with this other life and how these literal “two hearts” interconnect.

They are two people who fall in love, who go through these various kinds of experiences that we do as humans, and then in the end, you see how interconnected we all are. Everyone’s stories resonate with me actually, before I even signed on to this film. I had a friend who was waiting for a lung transplant in Australia, and she never received that lung, but it was a type of hope and a possibility that this was something that was going to extend her life. In making this story, the man whose life it is sort of based on did receive a lung from this other younger man, and subsequently, he and his wife became very good friends with the family and now are part of each other’s families in this most unusual way, but they have a very profound connection because, obviously, there is a piece of this other person inside of him.

When we first screened this movie, we were in a clinic with the real-life Leslie and her family because they were promoting organ transplants for those in need. We were in a room with the real-life families who this movie is based off of including the family of the boy who died, Leslie and her husband and all of the doctors. It was intense and beautiful. You could see the resonance of what the boy who passed, but in his legacy, there are institutions being built around him, and this could never have happened if the man did not receive the organ that he did in order to extend his life, in order to do these things. I think there is a lot of meaning to our lives that we do not even recognize at times when we are living them, and I think this movie shines a little light there. I find it fascinating to think about what we can do with our bodies. We are all humans, and we are all connected even when we don’t realize it.

WC: That’s true. People tend to not realize how significant a moment in their life is until years later.

Radha: Exactly! It’s an interesting time that we are in now because it is so contemplative and everybody is in a bit of a pause, wondering, “Hey, what am I doing with my life? What is important? What do I want to keep and what do I want to get rid of?” In a way, it’s also a very cynical time where nobody really believes, they feel depressed and everyone feels a little lost. I think this movie sort of brings us back to what is good in life and what the goodness of humanity is. We have to know what is good about people and how we can help each other. This film is different because it makes you feel settled and clearer about our humanity collectively.

WC: What drew you to this role?

Radha: I enjoyed this role because I was playing a real-life woman, it was a real story and I just loved her fairytale life. She fell in love with this super wealthy man who was genuinely a good heart and she was a beautiful character. Leslie is an amazing woman, and she basically kept this man alive with just her emotional strength and fortitude. To play a role in this fairytale story was fun and to play a person in love leaves this kind of joy that stays with you.

WC: How did you start your career as an actress?

Radha: When I was younger, I did a television show in Australia which gave me a chance to see what it took to be an actress. While I was at University, I was doing different television shows in Australia. Then after university and my experience of acting, I knew that it was something I wanted to pursue. After school, I got an agent and started to pursue acting opportunities. Then somehow, with a stroke of luck, a friend of mine was directing a movie that her dad was going to pay for. Even though it was a low-budget movie, it actually ended up going to the Cannes Film Festival and being sold to Fox Searchlight. Then through that experience, I found a manager. After six months, I landed a great role that lead to other doors opening. I always want to make sure that I keep a relationship with Australia as well because the Australian Cinema is culturally funded. A lot of movies that operate in the arthouse sphere are quite poetic, quite experimental, things that might not easily get made in the system here. So it’s nice to kind of dance between a bit.

WC: Does your faith inspire the type of roles that you take?

Radha: I think you are most alive when you are celebrating life and living in the moment because you never know what is going to happen. You have to accept that you cannot control life, it just happens. Of course, you will feel pain and question things in life, but by letting go of control and celebrating what life has given you can feel magical. Some people find that through faith and spirituality. With roles that I take, I try to tap into the character and their beliefs and especially in this film, there is so much heartache yet a lot of good things happen too. Leslie falls in love and is hit with this tragedy, but she holds onto her faith and beliefs that life can be good even through all of her pain. Even in the middle of a tragedy, things that we perceive as painful and difficult are often the things that we grow and learn from. “2 Hearts” definitely speaks to that.

In general, some of the movies I have done have been very dark and had a sort of emotional intensity, and I think that too is part of the human psyche that I think we should dwell in but we should not ignore, so that is interesting as well to me, but certainly, primarily movies that are moving forward some conversation. I even made a movie about “The Shack” which was about God and the man’s conversation with God, but with a different kind of perspective on Christian Theology, and that was interesting to me as well because I feel like the general public is so kind of afraid to be direct about a religious topic. It was great to sort of be in that world and talk in that language. Other stories I was honored to be a part of share stories of surrendering to God, couples trying to adopt a child and stories of how we [humans] lose things that we hold so precious in life, but we have to keep living. There are a few movies I have been a part of where later people have come up to me and said, “I really loved that movie. It really helped me reframe my own experience to look at my life differently.” That is why I do what I do. It always makes me feel that I am able to communicate with people on a deeper level. I certainly think religion has a lot to offer people in terms of giving them a reflection of good values to live with because it gets so confusing sometimes, and just an affirmation that we are not in control and we shouldn’t try to be.

WC: What advice would you give someone who is interested in pursuing a career in acting?

Radha: Anybody who wants to do anything in this world should just try to do it. The future of entertainment is changing. It’s no longer the quantity of content, it’s the quality. The story that a team is putting together is what is becoming the most important. So if you have a niche or type of interest that helps you tell those stories, then you should lean into that. If you have something interesting to say, especially as an actor, that can develop those stories, then that will give you an edge in the industry.

I believe the most beautiful thing about being an actor is that you’re telling a collective story about what it is to be human. And so always, when you are in performance, be totally open and don’t try to control your performance, but let the emotions come to you. When you let go of the control, it is kind of a magical experience.

Radha: I think the Salvation Army is sort of where it is at right now. The Army is literally serving people, and if you want to find a true happiness in this world, you have to find a way to serve. We all need to bring love into the world, especially right now I think we are all experiencing hate when we should be experiencing love. The Salvation Army is doing a great service to the world, and I am so glad that we are speaking today. 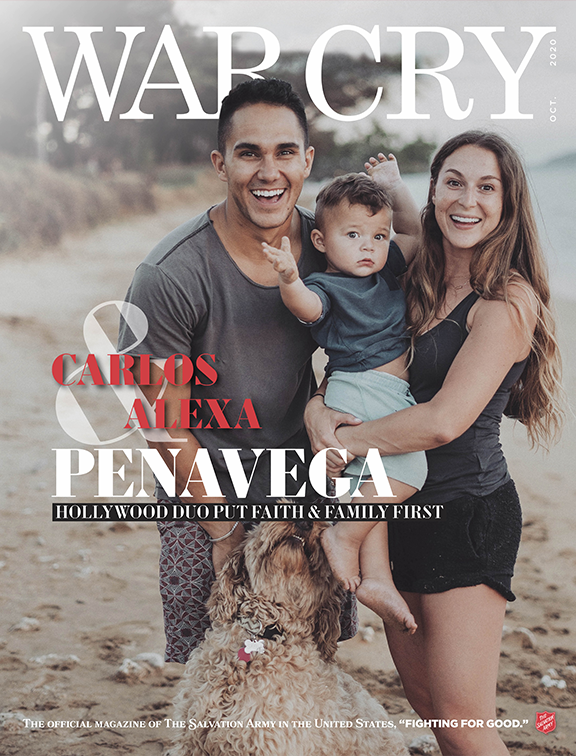