This Easter season be on the lookout for people God brings your way that need to hear and see your story. by Lt. Colonel Dean Hinson
Share
PRINT

Once again, we encounter God the gardener in a garden. He is entombed in a freshly cut cave and wrapped in a linen shroud in the person of Jesus. The opening of the tomb is blocked by a very large rolling stone in the shape of a coin. Jesus had been cruelly put to death by Roman soldiers who used the incredibly painful, agonizing punishment of crucifixion  as a deterrent to anyone defying Roman authority.

Once Jesus’ death was confirmed, He was taken down from the cross on that Friday and His body was wrapped with long sheets of linen cloth. Joseph of Arimathea, along with Nicodemus were granted permission to bury Jesus in a never used tomb in a garden near the crucifixion site (John 19:39-41). Scripture says that Joseph brought “75 pounds of perfumed ointment made from myrrh and aloes” as part of the burial process. No other disciples or followers of Jesus accompanied the body to the grave as the stone was rolled into place and the tomb sealed and guarded by Roman soldiers.

Friday evening and all-day Saturday was a Passover Sabbath and the garden was still and silent. The disciples were in hiding, fearful that they might be arrested and tortured like Jesus. I believe the angels watched enthusiastically for the Sunday dawn as the soldiers paced back and forth, guarding a grave. It was a long wait over three days filled with despair and hopelessness on Earth but with great anticipation and delight in Heaven.

It is not an accident or a coincidence that this takes place in a garden. We have seen in this study that gardens, planting, growing and harvesting are important themes in Scripture. A garden is a place where trees, plants, flowers, bushes and/or crops follow a cycle of life and death. Jesus said, “unless a kernel of wheat is planted in the soil and dies, it remains alone. But its death will produce many new kernels–a plentiful harvest of new lives” (John 12:24). Consider a bush in the ground that appears dead. With watering, sunshine and patience, signs of life emerge as a stem appears. As the bush grows, it produces fruit or flowers that contain more seeds containing more life. In the cycle, the plant appears to die, losing its flower or fruit through the winter. Once again it seems as though death has won. But come spring, life again pokes through the soil as buds appear, eventually developing into a beautiful sight and smell of a garden.

When Mary Magdalene returned to the tomb while it was still dark early Sunday morning, she must have wondered how she could possibly move the stone. She expected to find a dead body. Instead, she found the stone rolled away and the tomb empty! She rushed to tell Simon Peter and John, who raced to see the empty tomb for themselves.

Mary, having returned to the tomb, stood outside weeping. When she looked inside, she saw two angels who asked, “Dear woman, why are you crying?”

“Because they have taken away my Lord and I don’t know where they have put Him,” she responded. According to the account, the angels did not reply, and she turned to leave. Then she encountered someone who asked, “Who are you looking for?” She didn’t recognize Jesus and thought He was the gardener. She asked again where Jesus had been taken, but Jesus called her by name, “Mary!” Although she was unable to recognize His resurrected body, she knew His voice.

Mary Magdalene came to the garden weeping and left witnessing to what she had seen and heard. “I have seen the Lord!” she proclaimed, and her life was transformed by an encounter with the risen, living  Jesus. She may have mistakenly thought He was the gardener, but that is actually who He is–bringing to life that which was dead. As Paul puts it in his letter to the church in Ephesus, “even though we were dead because of our sins, [God] gave us life when He raised Christ from the dead” (Ephesians 2:5).

This Easter, God has given us a story to share—from weeping to witnessing—telling others the good news about the wonderful grace of God (Acts 20:24). This Easter season be on the lookout for people God brings your way that need to hear and see your story. 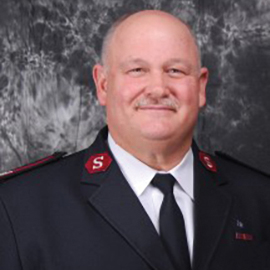 Lt. Colonel Dean Hinson is the secretary for Spiritual Life Development in the USA Southern Territory.